How many hair product advertisements have you seen that promise to repair damaged hair?

It seems like every shampoo commercial on television incorporates some scientific animation of split ends being re-bonded and strengthened as a result of product use.  Obviously, I’m not the only one who would like to repair hair damage…  But I’m not sold on the products I see on TV.

Because you can’t repair split ends, can you? My hairdresser told me that the only way to get rid of split ends is to cut them off. He said that once the damage was done, it was irreversible. 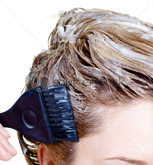 So which is it?  A simple shampoo can fix my split ends, or do I need to chop my hair?

It turns out that the answer is yes, a hair product can fix split ends.  But let me qualify that statement: only very specific products will do the trick (and probably not the ones that you see advertised in magazines or on TV).

It’s not a particular brand or a new type of product, but rather one, little ingredient that makes all the difference.

You might have guessed what the secret ingredient is: functional keratin.

We already know that functional keratin can do some amazing things, but did you know that repairing damaged hair is one of them?

The way it works is simple, but first, a little background…

WHAT EXACTLY IS HAIR DAMAGE?

You’re probably aware of the things that can cause hair damage… Heat from styling implements like hair dryers, curling irons, flat irons, hot rollers… Chemicals found in the developer for hi-lift hair color and bleach, perms, relaxers, and harsh straightening systems… Friction from brushing, hair ties and rubbing against fabric… It’s a long and daunting list. But how exactly do these things damage your hair?

Hair damage is essentially the degradation of the proteins that make up the outer cuticle layer of the hair. The cuticle can be thought of as a protective layer around the cortex (the inner core) of the hair.

This protective layer is made up of keratin protein cells that fit together a bit like scales: the cells overlap to create a waterproof and airtight barrier. Damage occurs when something damages the “scales” causing them to lift and separate.

When the cuticle in damaged, the cortex is left unprotected and is then damaged by heat, chemicals and friction. The cortex is also made up of keratin proteins that give your hair its strength and structure. The proteins in the cortex aren’t scaly, but more like a rope (did you know that keratins come in different families for different forms and functions?). When the rope is exposed to heat, chemicals and friction, it started to rip and fray.

And now you have hair damage on the inside and out. Bummer.

HOW CAN KERATIN FIX THIS?

Since the cause of damage is damaged keratin, real keratin is the only thing that can actually repair damage.

When you use a hair product containing functional keratin proteins, you are effectively replacing the missing and damaged keratin from your hair. As long as the keratin in your product shares the form, sequence (and therefore function) of the natural keratin, it will work just like your own keratin does and will patch up the frayed cortex and smooth out those ruffled protein scales.

Hello! My name is Cassandra and Keratin Questions is my alter ego. Just a girl who is utterly obsessed with makeup & hair.
My love for makeup got me started on blogging, and blogging made me even more interested in makeup!

Be first to know about new research, reviews and inside information about Keratin products.